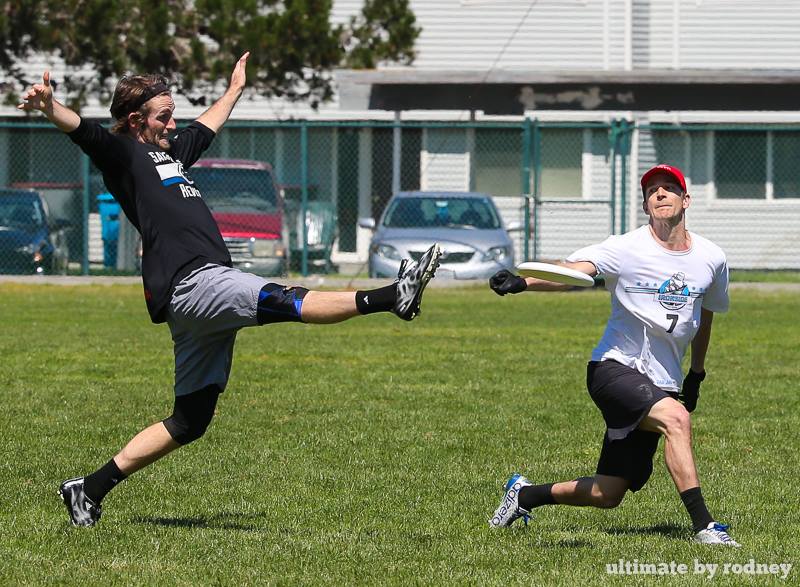 How I came to join Revolver:
I tried out for the team in 2012 but couldn’t really afford to play and didn’t attend enough tryout events for them to take a chance on me. I tried out again in 2013 and put in such a bad tryout that no one remembers me having made it to the last round in 2012. Thankfully I couldn’t play for the team in 2013 anyway because I was playing NexGen and then moving abroad in the Fall.

In 2014, I was graduating college and Ashlin convinced me to try out one last time and I was lucky enough this time to make the squad.

Favorite game or tournament moment on Revolver:
Traveling to Colombia for TEP this past spring was a pretty amazing experience. I’d never before had the opportunity to travel to South America and loved the experience of getting to practice Spanish, relax with the team, and play games in the stadium. I can’t say enough about how awesome the Colombian Ultimate scene is for promoting the event, helping offset costs, and generally creating great playing opportunities for themselves.

Favorite game or tournament moment outside Revolver:
No one forgets their first Potlatch (now Sunbreak). I was only 18 for mine and went with Polar Bears during our fledgling season. Most of the team (self included) took and RV up from California and drove all night to make it to the tournament. The entire weekend was just a sleep deprived mess of a good time, adventuring with some of my best friends and I somehow managed to also put on an incredible athletic performance for my teammates. That’s the fastest and springiest I’ve ever felt.

Favorite ultimate player(s) in my formative years:
In high school I looked up to JAM players a ton and thought my favorite was Brian Garcia. Then as I developed further I fell in love with the work ethic inspired by Kevin Cissna and Taylor Lahey. They put in a ton of work towards getting me to do things the right way and instilling mental toughness in me.

Favorite movie as a kid:
The Lion King was up there for a long time. I also love the movie Hot Rod but I think that came out while I was in high school.

Pre-game ritual:
I love to play flippy disc during the team’s warm-up jog. Anything to stay light and loose going into the game.

What I like to eat Saturday night of a tournament:
A lot. I’ve been moving away from red meat as my tastes sort of mature and I find I can hardly ever eat a lot in one sitting. As a result, my go to move is ordering two entrees and spending the next 4-6 hours working my way through them.

If I didn’t play Ultimate, my main pastime outside of work would be:
Hopefully something else outdoors. I love taking my dog on adventures. School is also taking up a lot of my time lately.

Favorite sports team outside of Ultimate:
The LABron Lakers baby! But really, the NBA is the best league to watch and I’ll root for just about any team in the West.

Something unknown about me:
I drink out of the right side of my mouth, almost never with a cup directly in front of my face. My theory is that this started as a kid when I was allowed to read at the dinner table and didn’t ever want to stop, but really… I don’t know, it’s just more natural at this point.