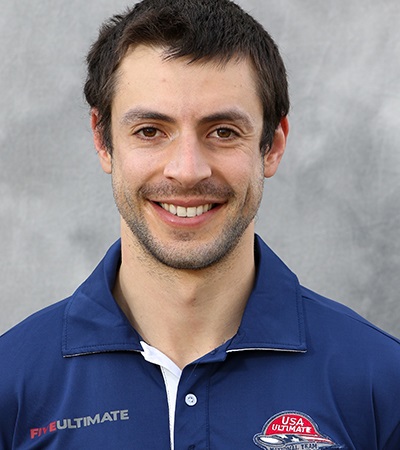 How I came to join Revolver:
In 2008, my college coach Ryo Kawaoka really pushed me to try out for Revolver because playing club makes you better for college ultimate. The rest is history.

Favorite game or tournament moment on Revolver:
Every worlds tournament – tournaments are the best part of ultimate, and being in a tournament setting for a whole week, nothing is better.

Favorite game or tournament moment outside Revolver:
Catching the game-winning huck to qualify for 2009 College Nationals. I still smile when I think about it.

Favorite ultimate player(s) in my formative years:
Jeff Cruickshank – best thrower of the time, I could only dream about throwing like him.

Ryo Kawaoka, Alexander Ghesquiere, Nick Handler, Chris McManus, and Mike Payne – they all taught me the fundamentals of the sport and how to play the right way

Favorite movie as a kid:
The Mighty Ducks

Pre-game ritual:
Old man warm up with the old people on the team.

What I like to eat Saturday night of a tournament:
A complete meal, the second dinner.

If I didn’t play Ultimate, my main pastime outside of work would be:
Reading more.

Something unknown about me:
I once — with roommates — raised rabbits from birth to plate.