The early bus never came to our hotel, so we waited for 20-30 minutes and called cabs, but the first scheduled bus arrived before the cabs. After depositing us at the Vrsovice complex for a transfer we discovered that our connection to Strahov had departed just before we got there. We waited 20 more minutes before they could get another bus in to take the crew to Strahov. The team was upset and frustrated that we wouldn’t arrive until 15-20 minutes before our scheduled start, but we knew that somewhere along this week our carefully laid plans would go awry; we just assumed that it would manifest on the playing field, not en route to semifinals. So we let the captains deal with it and tried to remain loose and focused.

Our game was pushed back to 9:00, though the adjacent Chain Lightning-Sockeye semifinal began on time at 8:30. A small crowd filled the shady seats in the stadium as we warmed up and set to work, all distractions behind us and the energy of a Worlds semifinal before us.

Game 10 – Bracket play, semifinals – 8:30 vs Bunka Shutter Buzz Bullets (Japan)
Buzz brought a small roster of about 15 players, so they all play a lot of points, and we hoped to tire them out quickly this game by using our legs to keep moving through, in, and around their battle-tested 2-3-2 junk defense and their man defense. Turns out they weren’t that tired, somehow, in their 6th straight tournament day, so credit goes to their coach, fitness regimen, and post-game acupuncture sessions. They also focus on switching sides of the field fast with low around throws, so we forced backhand, contained the around, and didn’t overprotect the inside- out pump fakes. Except for their super-athlete #10 Masahiro Matsuno, who we assigned to our fastest players #12 Nick Chapman and #14 Mark Sherwood, we fronted everyone downfield; this strategy effectively limited their underneath cuts too, as their cutters shut down until Masa could collect the disc and serve as the middleman between the handlers and the remaining cutters.

#37 Jonathan Hester earned a streaking layout block on an upline dump pass to set an early tone and set off a short cluster of defensive breaks. Revolver took half 9-5 also behind strong play by #1 Brian Garcia, who connected often for goals and assists this game. We could have stretched the lead even further but Masa, who was busy playing almost every point, made several spectacular blocks where he seemingly flew through the air. Buzz could only muster one break in the second half, though, and we took the game 17-14 on a bomb from Garcia to #6 Josh Wiseman.

The blue Revolver jersey went to #10 Masahiro Matsuno for his leading role. This was one of the most high-quality and highly spirited contests in which Revolver has ever been involved.  The level of mutual respect was clearly evident, with opponents congratulating each other after great plays, quickly resolved calls, smiles, and high fives–all while playing a tight and hotly contested match at top speed. It’s a shame only one of us could advance to the finals and unfortunately the emotional loss went to the Japanese.

More R&R, including a team dinner with family and friends, until the finals tomorrow afternoon against our old rivals from Seattle in an all-American affair played out on the pitches of Prague.

Back across town to Strahov for an early game on one of the satellite fields.

Game 8 – Pool play, power pool P – 8:30 vs Ragnarok (Denmark)
Ragnarok presented Revolver with another completely new style of play that confounded us for the first 6-8 points as we traded to start off. Our defenders tend to afford a larger buffer when the disc is across the field, but the Danes punished this with around-the-mark forehand blades for small to large gains and several goals. #1 Henrik Thomesen in particular forced his way open underneath and killed us with these throws. Ragnarok was clearly used to catching these, but Revolver was not, so our defenders blocked three of these throws that popped back into the air before the Danes retained possession. Eventually we dampened the around throws enough and reeled in our buffers to pull away for a 17-10 win. The Revolver jersey went to the fantastically spirited and good-natured #32 Thor Moller, who used his body to work all the way across the field.

Hence Revolver advanced with the second seed intact. We made our way back toward the main Strahov Stadium and ate a pasta and salad lunch at a nearby pub, then returned to the big stadium to watch Fury take care of their pre-quarterfinal opponent. We hunkered down in the shade, hydrated, stretched, and turned our minds off of our next match-up for a while.

Game 9 – Bracket play, quarterfinals – 15:15 vs Colony (Australia)
Didn’t get the name of the jersey winner for this one and the Aussies seemed dispirited to bow out, but they gave us a tough game. They were content to work underneath despite having the ability to work deep too, so we battled to a 15-8 victory in the afternoon heat.

Most of the team walked over to a nearby stadium to kibitz the last quarterfinal game between Ironside and Sockeye, the showcase game at this complex. The large crowd enjoyed the spectacle with a back and forth game, plenty of drama, and a great showcase indeed. Sockeye pulled it out 17-15 after being down two at half.

We face another early start tomorrow with our third consecutive 8:30 start in the semifinal against the dreaded Buzz Bullets. The tournament bus schedule won’t get us all the way back to Strahov in time for our desired warm-up time, so they agreed to send an earlier bus to our hotel.  Time to rest.

Most of the team attended the Revolver-hosted bar night at Popocafepetl in Old Town last night, but everyone arrived on time for warm-ups at Vrsovice, where we again trekked over the hill and through the tunnels to the remote field site.

Game 5 – Pool play, power pool P – 8:30 vs M.U.C. (Germany)
Munich seemed a little jittery as Revolver took the first half 8-1, but they settled down some in the second half as #8 Philipp Haas threw some very precise hucks to get things moving for the Germans; thus, the light blue Revolver jersey went to him. #29 Bart Watson played well enough to win a brilliant blue sublimated jersey from our opponents. It was a spirited game all around and both teams enjoyed the post-game hang-out by chatting and trading jerseys and wristbands.

Game 6 – Pool play, power pool P – 12:00 vs Flying Angels Bern (Switzerland)
The Swiss featured a couple of familiar faces to Bay Area players, as #29 Lorenz Stauffer lead the charge with his dazzling array of lefty hucks and hammers to anywhere on the field, so the Revolver defenders could never allow their marks too much leash. #10 Jon Remucal played his usual calm handler role, but stuck mostly to the D-line so Lorenz could anchor the O-line.  Revolver took half 8-4, though, and closed out the game 15-8. #12 Davide Morri, a superb Italian athlete, received a Revolver jersey for his workhorse approach, speed, and attitude.

Game 7 – Pool play, power pool P – 15:45 vs Phoenix (Canada)
Our neighbors from the north were tall, athletic, and included a particularly worrisome 7’0″ lanky guy, #50 Neal Dawson. As it turned out, we handed the Revolver jersey over to #12 Karl L’Oiseau for his tenacious defense, cutting, and spirited play. The youngsters stepped up big again for this hot game on turf, propelling us to an 8-4 lead at half and a sparkling second half to close it out 15-5. We chatted with Phoenix afterward and took a picture of Nick Handler on Jit Bhattacharya’s shoulders, with his hand raised high, still unable to match the reach of Mr. Seven Foot.

We secured a spot in the quarterfinals, which play out tomorrow afternoon. For now it’s R&R before another early start.

With our favorite Northwest Region rivals up first in the power pool this morning, the team chomped at the bit and arrived at the remote turf fields at the Vrsovice complex. Our field sat in a school campus atop a blustery hill. Doublewide matched Chain Lightning and took the first half before suffering an unfortunate second half surge by their opponents as we looked on.

Game 4 – Pool play, power pool P – 10:45 vs Sockeye (Seattle)
Sockeye started with an awesome lay-out catch block by #15 Nate Castine for a break, but that was their last lead of the game as Revolver would score and then tally several breaks in a row.  #7 Russell Wynne skied two Fish for an endzone D and would continue with a few extra Ds to his credit. This game was played at a much faster and physical pace than the first two days, which both teams expected, but still felt very different. #1 Brian Garcia and #50 Beau Kittredge both impressed with athletic vertical goals on floaty hucks too. We took half 9-5 as a vast dark storm loomed, but Sockeye caught a couple more breaks to make it 13-10. Lightning strikes closed in and the game was suddenly suspended as the clouds opened up and everyone ran for cover. It counts as a victory but nobody was happy that it had to end before someone scored 17.

Everyone scarfed down lunch as the rain continued and then eased up, but the bad news came across the PA that most of the day’s remaining games were postponed. We headed back to the hotel for some R& R.

Can’t have a season without some dunes 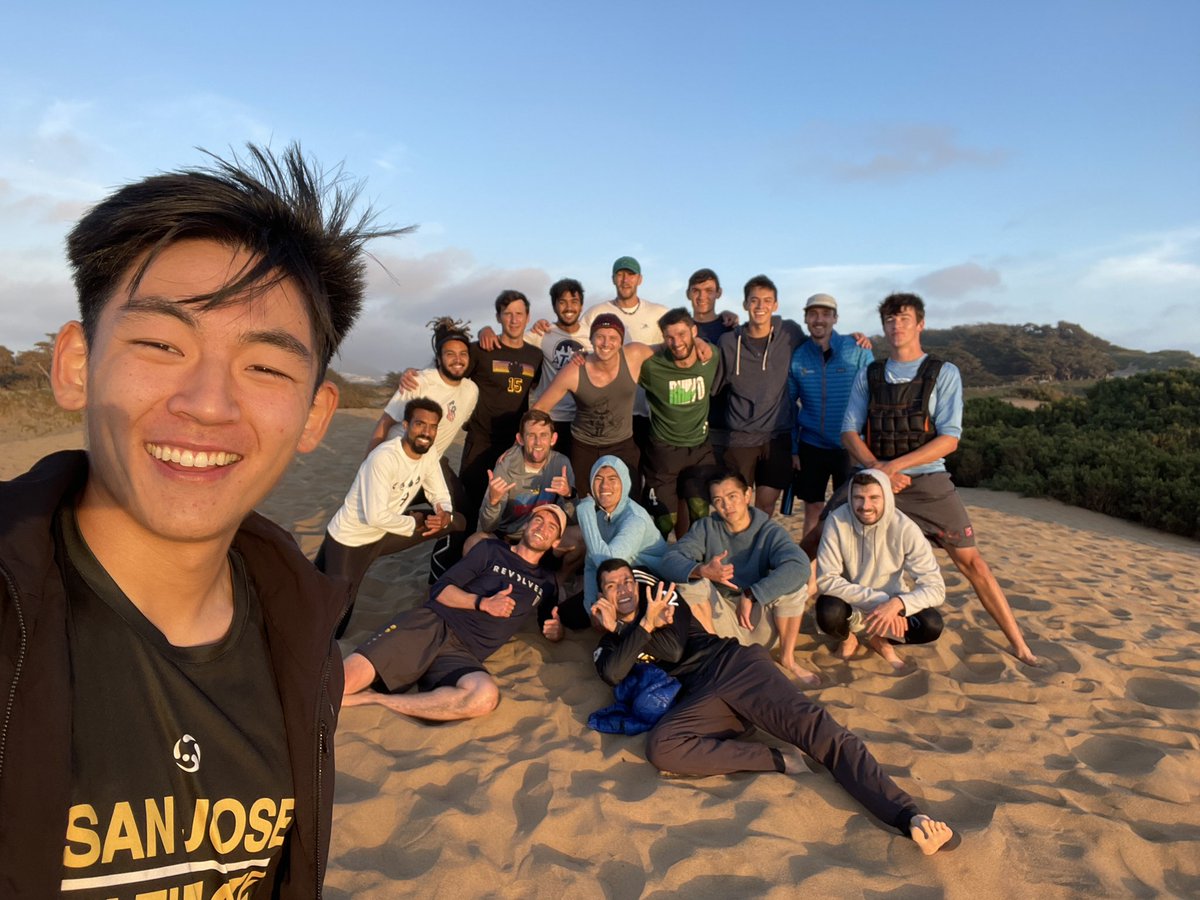 This makes me really angry and sad. Also, super relatable for me and so many other Black women. Dunn deserves bette… t.co/Qhf59b8rbO

@magscolvett As long as the avocado is fine, we cool.

Tune in for all our deepest darkest secrets t.co/0wO83yAzFW